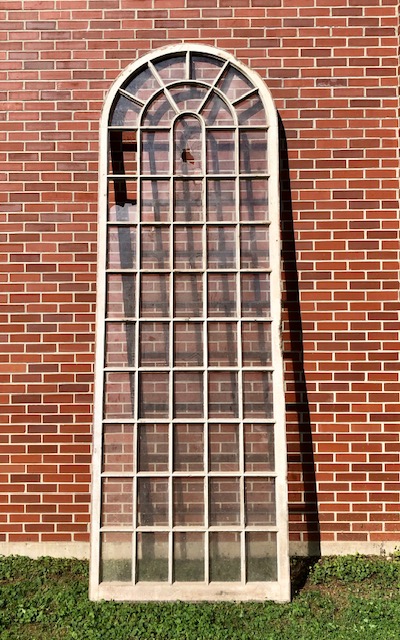 The Chapel renovation project, a careful yet extensive restoration, has had its fair share of discoveries and challenges. We brought the Chapel clock back to ticking life, uncovered the origin story of the beautiful Chapel cross (look for the full feature in the upcoming issue of WRA Magazine) and now have experienced the new unexpected — the recovery and return of the center panel of the original Palladian window.

The news came in yesterday through a phone call from Katie Hoy, alumni parent to Cynthia Hoy Bowman '78 and wife of the late George Hoy, former Board of Trustees member. Katie also happens to be the current owner of The Inn at Brandywine Falls, and as a neighbor to Hudson and friend to WRA, she heard of the Chapel renovation and the plans to reopen the wall where a Palladian window once sat. This was of particular interest to her, and she phoned the school to share why. In her words: "I have your original window if you'd like it back."

As the story goes, she and George moved to College Street in the early 1970s. Around that time, George learned that the Chapel window was on its way to the trash heap (shocking, yes, but we can only assume that the window had been stored for some time before, inevitably, getting in someone's way and prompting a "we'll never use this again, let's just get rid of it" conversation).

George asked if he could have it and was told he could, and the window was rescued by an unexpected hero.

According to Katie, George never did anything with the window, but even when they moved from Hudson to Sagamore Hills, the window moved with them. It was placed in their barn and that is where it stayed until this week when Director of Facilities Jeremy Paul went to pick it up. Upon inspection, we learned that it is, unfortunately, not in good enough condition for reinstallation. But it will still return to the Chapel as part of a special, permanent museum-style installation, which in addition to the original window panel will also include the old clock face and Chapel bell that were first installed in 1836.

We're often reminded that WRA, as an institution, is rich with friends and those who care deeply about this school, its history and even its discarded parts. We are thankful to have such friends as the Hoys — George, who might have simply thought the window to be an interesting piece (or who perhaps had the foresight to know the school would one day want it back), and Katie, who kept it safe and coordinated its return.