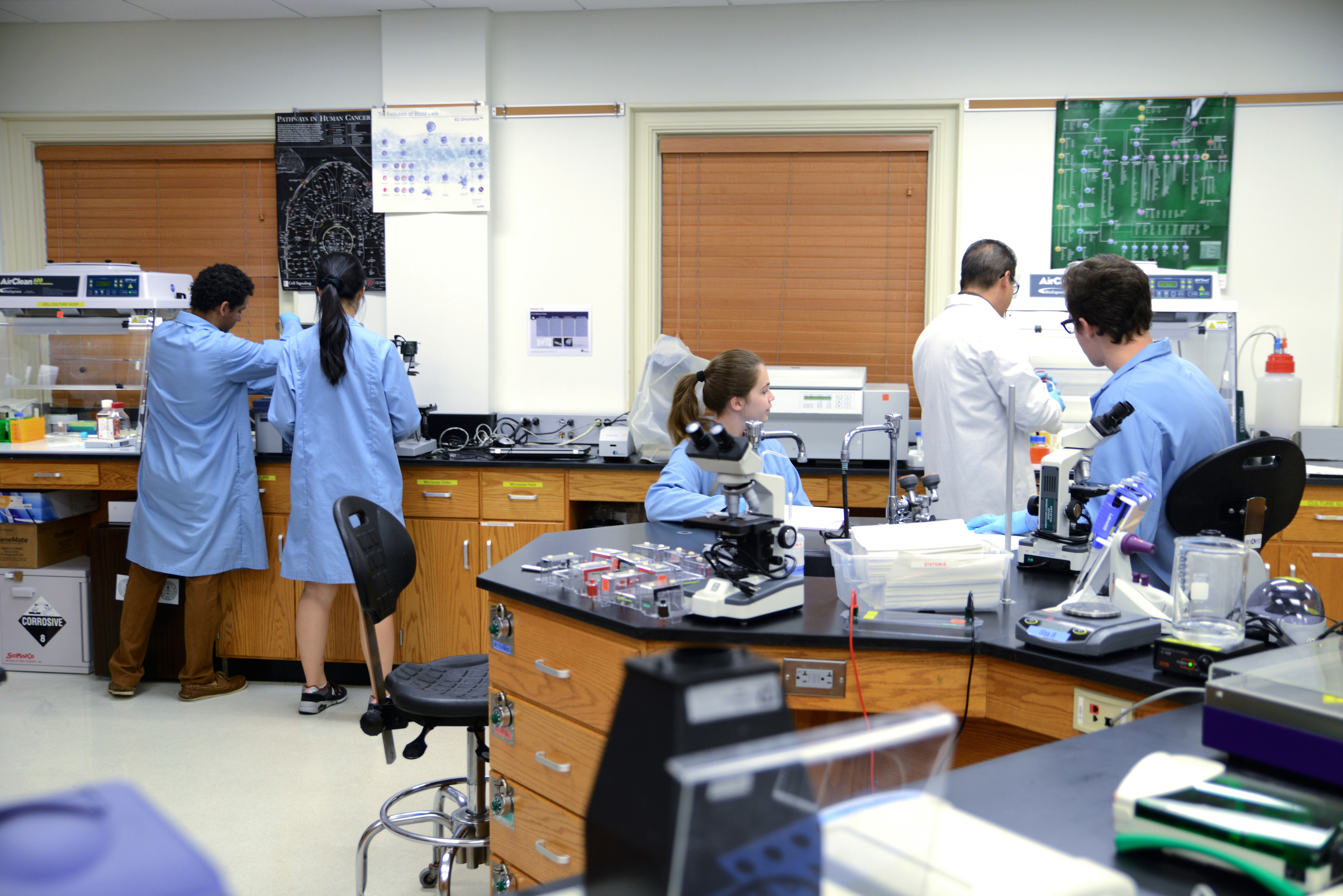 On some days, the students in Dr. Robert Aguilar's Cancer Immunology class beat him to his classroom. With blue lab coats and plastic safety goggles donned, they make their way to their stations in the wide, two-room lab. Some check in on their mouse-patients and others prepare for another session of testing and analysis. Amid the sounds of light chatter and lab work, music filters through the air from a radio playing a baroque music station â a salute to Dr. Aguilar's post-graduate years and his study on the efficacy of the Mozart effect.

Like their mentor Dr. Aguilar, the Cancer Immunology students aren't intimidated by the often grueling work of medical research. Rather, they have the determination and passion to dive into such a complex field and are fueled by the hope they may be a part of the long-fought battle to beat cancer.

There is nothing theoretical or simulated in WRA's Cancer Immunology. These high school students are working with real testicular and breast cancer cells donated by the Cleveland Clinic. The lab equipment and software at their use is either identical or rivaling the labs inside the very same world-renowned institution. This is, in part, thanks to Dr. Aguilar's connection to the Clinic as a visiting scientist and active researcher. The professional grade of the lab is also largely due to a generous gift of medical equipment from an alumni parent, the sum of which totals more than $300,000.

Cancer Immunology certainly isn't an easy course. In order to produce authentic analysis, cancer research â indeed, all scientific research â requires meticulous attention to detail, continuous rounds of trial and error and the resolve to persevere in the face of failure and learn from it. But WRA students don't shy away from hard work. Better yet, they are eager to pour their energy into a meaningful and worthwhile cause. 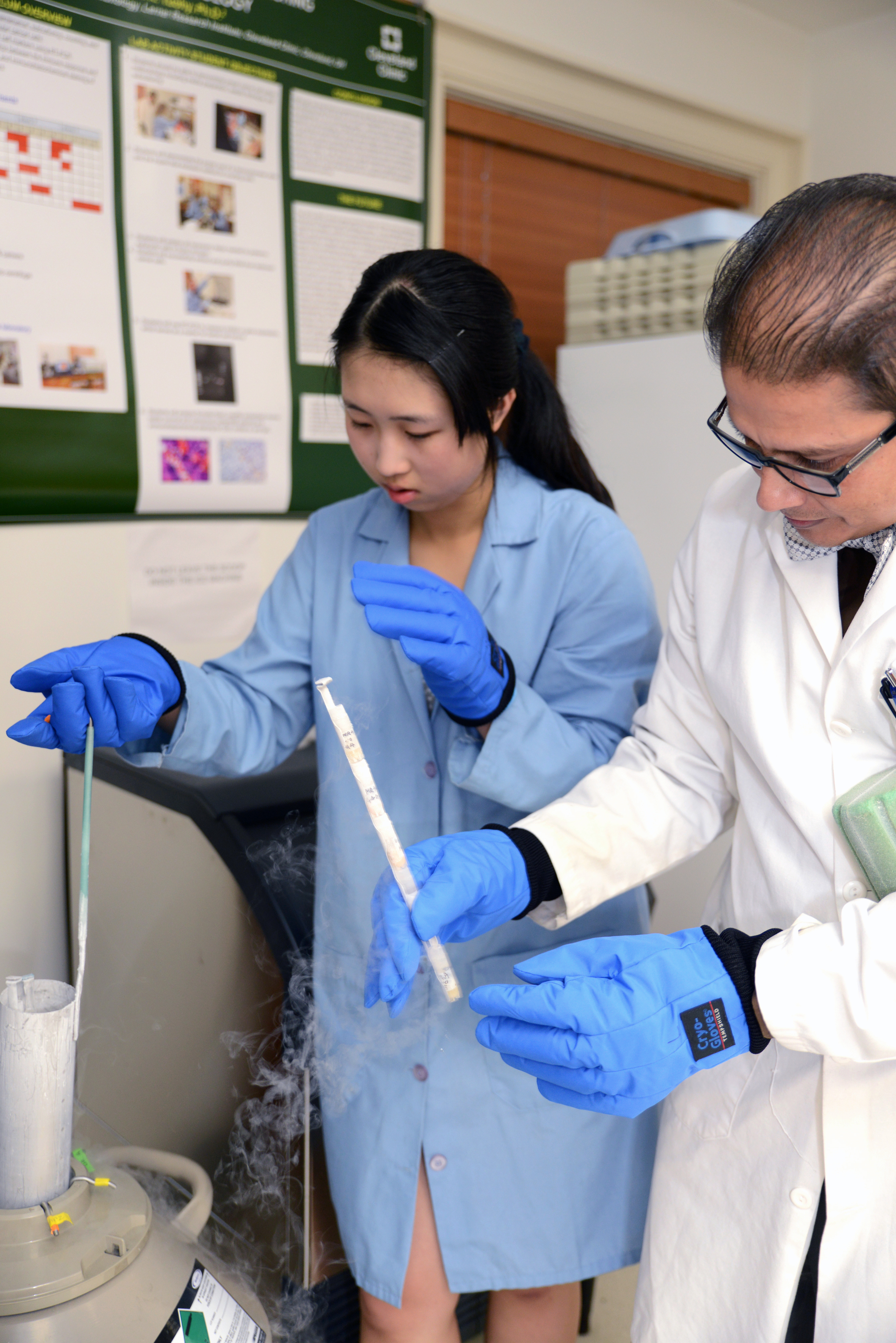 For some students, the research hit close to home, such as Hannah Saucier '16, who had to opportunity to work on the very same cancer that had afflicted her mother. Working with Dr. Aguilar helped her better understand the illness as her mother fought her way to a full recovery.

If there are any high schools offering this same opportunity, they are few and far between. After all, many would think high school students wouldn't be qualified to conduct such important and sensitive research, let alone produce noteworthy results.

Dr. Aguilar is happy to prove them wrong.

"I was describing one of the projects to a group of Cleveland Clinic researchers," he explained. "There had been an interesting development with an oral inoculation. I told them about that experiment, and they became so intrigued that they actually paid to have our microscope slides made. We have all of these cross-sections, and the Cleveland Clinic covered the cost so that the students could examine the tumors under the microscope."

The setup of Dr. Aguilar's lab at Reserve is quite similar to the research lab in the Cleveland Clinic's Immunology Department, the same lab where he conducted research that led to a vaccine for testicular cancer, as well as the research for a breast cancer vaccine, now in clinical trials. 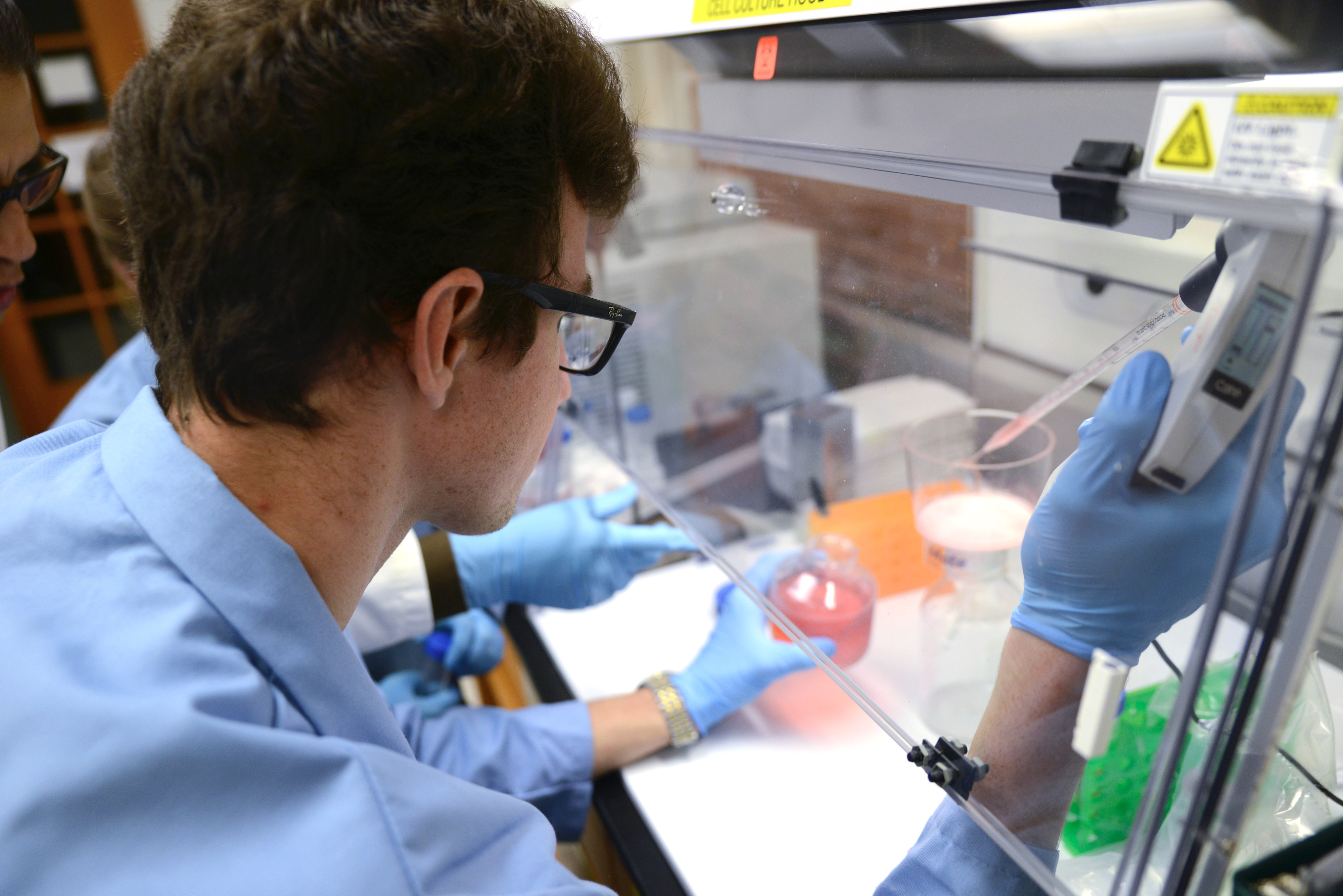 When the program first began, Dr. Aguilar divided the course into two sections. First, students would take Biotechnology, a course devoted to the teaching of proper lab protocol and equipment use, where students would learn how to be careful and responsible researchers. The graduates of this course could then take Cancer Immunology, where they applied the skills they learned in the precursor and conducted their own research project.

Now, Cancer Immunology is divided into first-, second- and third-year students. The second and third years have either one or two previous Cancer Immunology courses with Dr. Aguilar under their belts. They act as advisors to the first years, and part of their grade is determined by how effectively and accurately they instruct and mentor the new researchers.

For Dr. Aguilar, this is an excellent way to measure how much his students absorbed under his tutelage. It's also a quick way to curb any bad habits his researchers may have inadvertently picked up. After all, even just the slightest misstep can contaminate an experiment and ruin months of research.

But that is a rarity. After all, these students are committed to their research. They wouldn't be in the class if they weren't.

"I interview each of them before they are admitted into the class," said Dr. Aguilar. "They can't just sign up for Cancer Immunology, they have to have a one-on-one with me and I talk to them about the course â the rigor of the class and even the ethical challenge of working with the lab mice. I try to get the more serious students that aren't just trying to get another notch for their college application, but those that are actually interested in the medical field."

"This year, there were some students I had to turn away because they didn't fit the requirements," he explained. "I didn't think it was going to grow this much, but I'm glad it has! There's a lot of demand for it."

"Cleveland is known around the world as a center of medical excellence and innovation," said WRA Head of School Christopher D. Burner '80. "There should be a school in the region that both leverages this notoriety and endeavors to build a pipeline for the next generation of medical pioneers. We are very proud of Dr. Aguilar, our students and this program, the only of its type anywhere in the country." 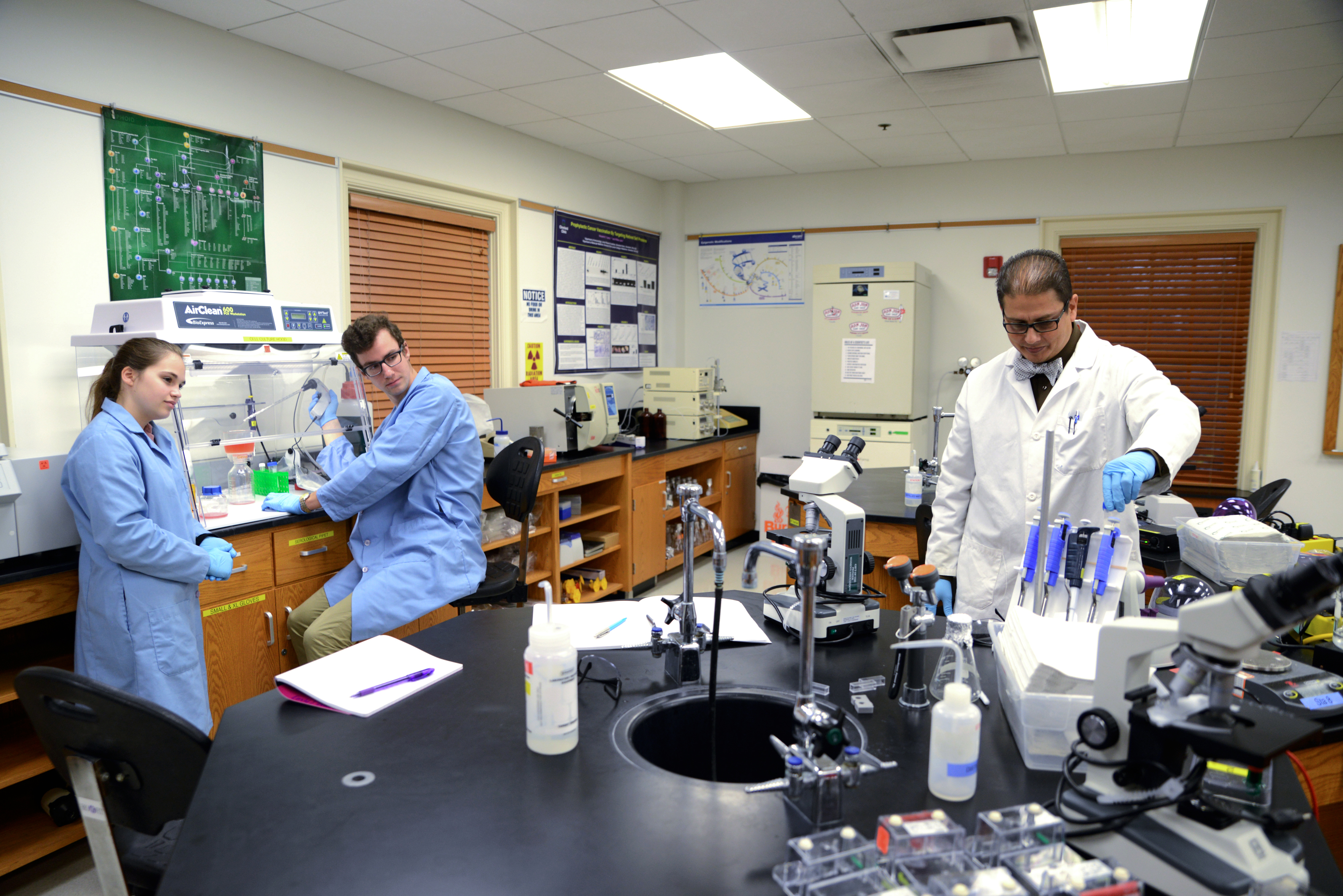 WRA's new schedule, afforded by its new independent curriculum, means Cancer Immunology is now a 75-minute course. Dr. Aguilar was very much in favor of the extended class periods to give his students more time with their experiments. Even still, his students often use their free time â such as the daily A+ period â in Wilson Hall.

There's even an after-school program, Biomedical Research, for those who seek even more time in the lab.

"In the fall, I had around 10 students for Biomedical Research, and then in the winter, I had around 13," said Dr. Aguilar. "That's what I try to target. These are the students who are already working on a project in here that want more time. It begins right after school, Monday through Friday, and some nights, we'll stay here until 6:30-7 p.m."

Students' interest in Cancer Immunology is still high. Recently, the classes hosted an end-of-the-year Cancer Immunology Research Expo in the Wilson Reading Room. The room was full of faculty, staff and students, with questions abound and curiosity peaked as students roamed from presentation to presentation, quietly amazed by their peers' astounding work.

One group of students conducted experiments with capsaicin, an active component in chili peppers â the culprit for the spicy, burning sensation you feel when you bite into a pepper. Nita Reddy '18, Serena Gao '18 and Ashley Lyu '17 (the originators of the project) chose to work with capsaicin because of preexisting research they found, in which scientists learned that capsaicin can kill cancer cells. In their project, they aimed to draw even further conclusions through their own research.

As the program continues to evolve and students continue to aim higher and higher in their projects, Dr. Aguilar has set his sights on a new development â the creation of an ethics committee.

"There are some students that are becoming so advanced that they have asked to do some embryology work," he explained. "We've never done that, but there's a lot of interest from the students. So I've actually started making plans to put together an ethics committee, where we can get certified to do that kind of work. We would have to have an internal review board or an institutional review board before we can do any kind of experiments of that nature."

Whether the future of the program includes our very own review board is still up in the air, but Dr. Aguilar is proud of his students for their devotion to scientific inquiry and drive to push the boundaries of their investigations. 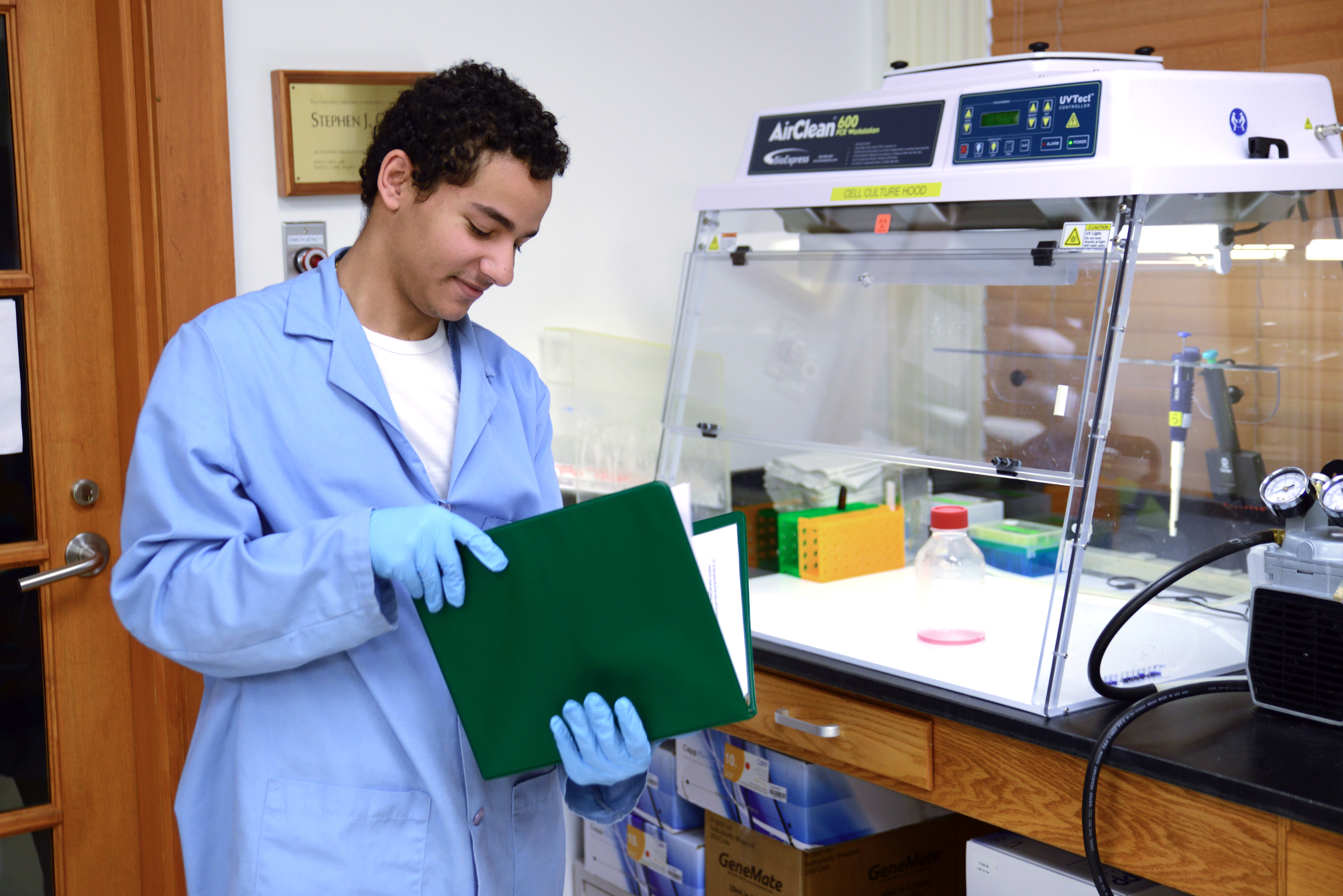 On a typical day, Dr. Aguilar's students are focused, patient and relentless. The road to cancer research is a long one, and they know that it will take a great amount of time before they can draw any conclusions and that they can expect plenty of roadblocks along the way. But there are moments of delight in the long wait.

They are intrigued by what they see in the petri dish or beneath the microscope, and they are excited and inspired by their classmate's progress. The projects they undertake could be brand new or the ongoing project from recent graduates, passed on to a new team of researchers. Indeed, when seniors Cancer Immunology students look to the end of their final year at Reserve, many look to pass the torch to another group of researchers.

And so, Dr. Aguilar hears them make their pitches, volleying details and hypotheses back and forth across the classroom, before a younger student or two takes interest. From there, the seniors train the fledgling researchers to continue their work.

Of course, Dr. Aguilar says that there are other seniors who choose instead to take their research with them when they depart.

"That's one of the things I tell them," said Dr. Aguilar. "If you go and you find yourself in a lab where they'll let you continue this, even just as a side project, you're welcome to take it with you. The only thing I ask for is that if you ever publish, you give us credit. This is where it all started."

Even if they don't continue their projects, the students who graduate this class are leaving as capable and devoted researchers with skills and instincts any lab would be fortunate to have.

"When our students go to Case Western Reserve University or the Cleveland Clinic for internships, those researchers notice right away that the kids don't have to learn the techniques," he said. "They're jumping right in and that's what they love! They start helping, I mean actually helping moving their projects forward, and they now have an extra pair of hands that they can trust."

As the 2017â18 school year ends, Dr. Aguilar looks to another year of Cancer Immunology. There will be returning students ready to continue their projects or start one anew, a fresh group of young researchers eager to learn and the tentative dream of a review board to give students the chance to explore even more ambitious projects. Like in his previous classes, he expects meticulous hard work and hopes to see the same exuberance he has seen in all of his previous classes. He hopes they will continue to beat him to his classroom, stop by in their free time and look for even more time in the lab.

"I love their enthusiasm," he said. "I hope that never goes away. They just come in here and really like to work. And in this field, there's always work to be done."