Western Reserve Academy is known for its warm, welcoming style and Midwestern values. Now the school has a new Admission Office that shares these attributes and is ready to welcome future Pioneers.

Once home to the first three presidents of Western Reserve College, President's House, along Brick Row, is the most finely appointed and decorated building on our campus and the most Federal in style. A Reserve faculty home until 2015, President's House saw one earlier renovation in 1959 but showed its age less gracefully until its just-completed renovation.

Thanks to Sherry and Marty Franks '68, the transformation of President's House is complete. This gracious new "front door" for the school honors the building's rich history and reaffirms its inclusion on the National Register of Historic Places. It also honors Marty Franks' parents for the sacrifices they made to enable a transformational Reserve education for him.

Within the first few minutes of almost every conversation with a Reserve alumnus, something like the following statement is made. 'Western Reserve Academy changed my life.' I am one of those alums. I owe Reserve a lot. Restoring President's House is a way to begin to repay that enormous debt.

– Marty Franks '68, WRA Trustee and Chairman of The Campaign for Excellence & Access 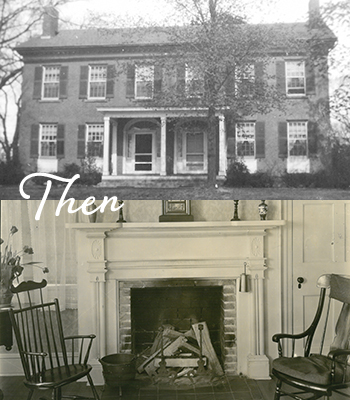 “Pioneers struggled over hill and dale bringing limestone slabs for the foundation of a Reserve home. Others dug clay in a nearby pit for bricks which went into the walls. Craftsmen skillfully carved doorways and fireplaces…This home when first built was considered the last word in substantial refinement."

— Written by Joe Tomlinson ’31 in the April 1930 edition of the Reserve Record. 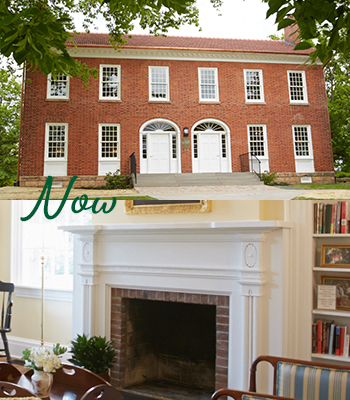 "Everyone that passes by on tours asks, what is that? And I say, 'Well that’s President’s House, it’s one of the oldest houses on campus.' And they ask, 'So what is it now?' And I say, 'Well it’ll be the Admission Office.' And they really like hearing that. This is a great new addition to our campus."

The Franks’ commitment to sustainability led to the integration of geothermal heating and cooling for the house, which was the impetus for geothermal plans for the renovation of Seymour Hall, the academic heart of campus. Eleven borehole wells were drilled into the earth, now hidden by grass, to implement an aesthetically pleasing, economically smart and environmentally friendly geothermal heating and cooling system.

We hope that students can study the geothermal system and experience a real world example of environmental responsibility right along Brick Row.

The transformation of President's House has given it a beautiful new purpose and will provide new students and parents with a warm welcome to the school. Our Admission Office and all of our Chief Ambassadors are proud to call the new space home and look forward to greeting and meeting new families to Western Reserve Academy in this historic building. Located at the heart of campus, President's House will be a space for the entire Reserve community.

I became an ambassador because I really wanted to show off the school! I l love Reserve, and I really want other people to see what it can bring you — what the benefits are, and help others make that high school choice.

Read more about the President's House renovation in the winter 2017 issue of WRA Magazine.