The 2019-20 academic year was met with numerous changes, but in the midst of welcoming new school leadership and getting to know a new group of Pioneers, there was a bittersweet departure from Morgan Hall that was keenly felt by the school. After 45 academic years of serving the school and caring for its community members, Dr. Steven Johnson retired as the School Physician, and Dr. Vishvas Hegde took the helm.

It is a difficult thing to capture all that Dr. Johnson did for Western Reserve Academy during his multiple decades with Reserve. His career with the school had a humble start when he received a call to do a favor for a friend. 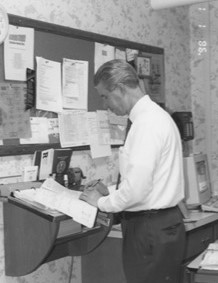 "I remember it was October of 1973," he recollected. "I was in my first year of postgraduate medical training in Pediatrics at Akron Children's Hospital. Dr. John Kramer, who was a pediatric cardiologist, as well as a 1948 graduate of Reserve, called me one day and said that the school's physician was going to be out of town that weekend, and they needed somebody to be on the sidelines at a home football game, just in case somebody was hurt. I took the job, of course! That incident opened up Reserve to me and paved the way to starting a Pediatric practice in Hudson."

From there, his involvement with Reserve only deepened, as he continued to work intermittently, stepping in when needed and enjoying his time while there. When Dr. Leo Wolf retired from the position of School Physician in 1986, Dr. Johnson interviewed for the role he had, in part, been training to take on for many years. It was that year that he became the official School Physician for WRA, a post he would hold until 2019. He even saw his two children graduate from the school, Sarah '95 and Zachary '98. His wife, Henny, was also deeply involved with Reserve. She was the Treasurer of the Pioneer Women's Association for nine years, as well as a driver for the Health Center for several years prior to Dr. Johnson's retirement.

Ever since the beginning, football had a special place in his heart, and he admits he still attends games, when he can.

"I'd say I went to about four-to-five home games a year for about 34 years," he guessed. "I really enjoyed it. I liked getting to meet the coaches, many of whom were faculty members of course. I always loved to watch the games, though I was always nervous that somebody was going to get hurt!"

Over the years, he and the Health Center nursing staff had a steady influx of patients who primarily came in for illnesses, orthopedic injuries from sports (or the occasional activity gone wrong in a dorm room), and issues pertaining to their mental health.

"We always took every case very seriously," he explained. "Whenever we had a student come in, even if they just had a cold, we would check their nose, throats, ears and lungs of course, but we would also listen to their hearts and palpate their abdomens. You really never know what you might find."

He recalled one student who came in with the complaints of decreased hearing, and during a routine physical exam, it was discovered he had an entirely unexpected and rare condition.

"Oddly, I noticed that he couldn't supinate, or put his palms up facing upward toward the ceiling," he explained. "We found out he actually had what we call a radio-ulnar synostosis, where the two bones in the forearm had fused together. A little online research unearthed a syndrome tying the hearing deficit and the synostosis together. Even though there was no treatment for the condition, it allowed him and his family to better understand his situation."

During Dr. Johnson's tenure, he witnessed a great deal of change at the school, including the transition of the Health Services office from the garden level of Hobart House to the Burton D. Morgan Hall and, perhaps most importantly, a shift in the methodology and priorities of his own department.

"One of the ways that the Health Services really changed is that I really feel that we were being more proactive as opposed to reactive," he shared. "Students have a lot more access to health education. I realize most schools offer a health class of some sort, but I appreciate that our own nursing staff will reach out to the students. We are trying to be in a more preventative mode rather than just reacting to the students' injuries and illness, and I think that's a great model."

After so many years with Reserve, Dr. Johnson shared that it feels a little strange to settle into retirement.

"I think the primary thing that I miss is that I never considered this as a job," he said. "Over the years, I really got to know a lot of the faculty members and spent such a long period of time with them. I often had their children as patients in my private office. I can remember one time I had a late night call from former Headmaster Skip Flanagan. There was a new faculty member and his wife and children on campus. They had arrived late to the campus due to a travel delay, and when they arrived, one of the children had fallen ill. Skip asked if I could come see them, and I took a look at their child that very night."

The profound connection he feels to Reserve goes further than his decades of medical service and care for the community, and the school will always be a place where he feels at home.

"Reserve has always been like a family to me," he said. "I never considered it a place where I came in and punched a clock. I felt lucky that I was able to meet a lot of wonderful faculty members and students. It's been rewarding to see a lot of those students go on to do incredible things in their careers, in their lives. It's just been an absolutely amazing time."

Passing the torch to Dr. Hegde was, for Dr. Johnson, a very easy and comfortable transition. After all, he had known him for years.

"I met Vish when he was training at Akron Children's," he explained. "Dr. Jeff Kline, who was a pediatrician in Cuyahoga Falls, and I used to cross cover on weekends and for vacations. We would bring in Vish to cover for one of us and even work in our offices when one of us was away. When Dr. Kline retired, I really had to rely more on Vish. I've gotten to know him and his family very well, and I just think the world of him."