Pete Hutchins, a veteran of the boarding school sector and accomplished collegiate and prep school coach and player, is joining the leadership of WRA's Athletics Program and will also serve as Head Coach for the WRA Boys Basketball program. Hutchins will begin his tenure at Reserve in July, following years of success at George Mason University, Dartmouth College, Williams College and his high school alma mater, the New Hampton School (New Hampshire).

With a humble style, Hutchins just might be mistaken for a Midwesterner, though he spent his childhood and career in New England. When asked if he was as good a player as he has been a coach (his coaching accolades include being named the 2015-16 AAA Coach of the Year by the New England Preparatory School Athletic Council and player development that has launched several NBA careers) Hutchins leaves personal details for last. His own accolades include the fact that, as a college junior at Plymouth State, he led his team to a school best record and the second round of the NCAA Division III Tournament. Hutchins knows how to win.

But his focus is on his players and students.

"My responsibility is to make sure all kids have a really good experience with athletics." said Hutchins. "I want sports to be a big part of what students love about their time at Reserve. In my new role, I'm excited by the opportunity to help further define the culture of athletic programs at WRA and to be a steward of the school in a meaningful way."

WRA Head of School Suzanne Buck first met Hutchins during her tenure at New Hampton, where Hutchins coached basketball and worked in the Admission Office, which she ran.

"Pete is enthusiastic, incredibly structured, hard working, tenacious and a strategic thinker who gets things done," said Buck. "He understands the specialness of boarding schools and maximizes what can be offered and achieved in this environment."

"I am extremely excited to add Pete to our WRA community, athletic department, and specifically, our Boys Basketball program. Peter is an experienced and talented coach who will continue to elevate our program. I also look forward to working with him closely within the athletic department."

Hutchins credits his time coaching college basketball with improving his talents relative to opponent scouting and offensive and defensive philosophy, saying the experiences made him a better coach. But he relishes the opportunity to re-engage with students at the high school level, particularly at a boarding school.

"At the college level, you miss the relationships with the kids," he said. "Boarding is a unique environment that provides so many ways to connect with students. One of the most rewarding aspects of working in boarding schools is the mentorship of students and graduates, and the cultivation of relationships with families of those students. As a community leader through athletics at WRA, I look forward to forming and nurturing these important relationships while also having a broader impact on the school's culture and health."

Hutchins has put many points on the board for student athletes and players, with six of his players from New Hampton going on to play in the Ivy League and three others eventually selected in the NBA Draft. But as he plans for his leadership role even beyond the court at Reserve, Hutchins believes athletics have a core purpose for all students, regardless of the loftiness of their aspirations.

"My main goal for students is that they love their sport. They need to be excited about what they are doing. I want to put students in a position to reach their goals, whatever they may be."

Hutchins has built his professional reputation in the areas of recruiting and player development, skills that will assist Pioneer athletes but also transfer seamlessly to his broader administrative role. No one values the idea of teamwork more than a coach, and Hutchins has a collaborative spirit that will benefit Reserve across disciplines.

"My work as a basketball coach, classroom teacher and Admissions Officer has given me the opportunity to interact with elite coaches, educators, administrators and many parents and alumni. I am as comfortable discussing school culture with prospective families as I am helping student athletes find the right fit for college. Still, what I like more than anything is communicating with people on a genuine level about things that matter."

In other important WRA Athletics news, Associate Director of Admission and Athletic Liaison Thomas Adams-Wall, who has led the Varsity Boys Basketball team, will now join the Girls Basketball program as their Head Coach. Hutchins and Adams-Wall have been collaborating to maximize the new structure and strategize and build a strong program on the Boys and Girls sides of the game.

"This is something I'm really excited about," he shared. "We have such a good group of returning players, and I know them pretty well. I'm looking forward to the change." 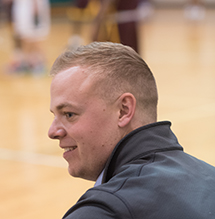 Adams-Wall has a great deal of experience, both as a player and a coach. He played for the College of Wooster and in his junior year, his team competed in the NCAA DIII Men's Basketball Championship Game. After graduating, he coached at Wooster before taking a role at Western Reserve Academy's Admission Office. Here, he was the Assistant Coach for Varsity Boys Basketball for three years and Head Coach for four years. During his coaching career, he has seen players graduate to compete at Columbia, Williams, Bowdoin, Oberlin and Elon.

As a coach, he knows well how to teach skills, competition and gameplay, but he admires Reserve's Girls Basketball program for their team spirit and work ethic.

"Emily [Thews-Baldridge] has done such a good job developing this great culture of positivity," he said. "That's definitely something I want to continue. She's also done a great job coaching players with such different goals. You have your students like Jade and Jai DuVal, who are playing at Amherst and Bowdoin. Those aren't just two of the top academic schools in the country — they are two of the top DIII women's basketball programs in the country, as well. And you have players who are here just to be better athletes and because they want to be a part of a team."

"With Emily Thews going on maternity leave, I am excited to have Thomas switch to the girls basketball program and lead the team for the 2020-21 season," said Haller. "This move will allow us to continue to raise the bar for girls basketball at WRA."

For Adams-Wall, a great basketball athlete is one that focuses on the whole team rather than their individual play, one that shares and celebrates their team's victories, and works hard to be the best player for the success of the whole group. He's looking forward to leading the Girls Basketball team and further ingraining this philosophy into the program.

"As their coach, I want them to have fun and I want them to be great competitors," he said. "I'm ready to help them hone and develop their skills, achieve their dreams and get them playing at the next level, wherever that may be."