Venturing Back, Looking Forward: Brad Burnham '73 returns to campus as the 2019 Morgan Speaker 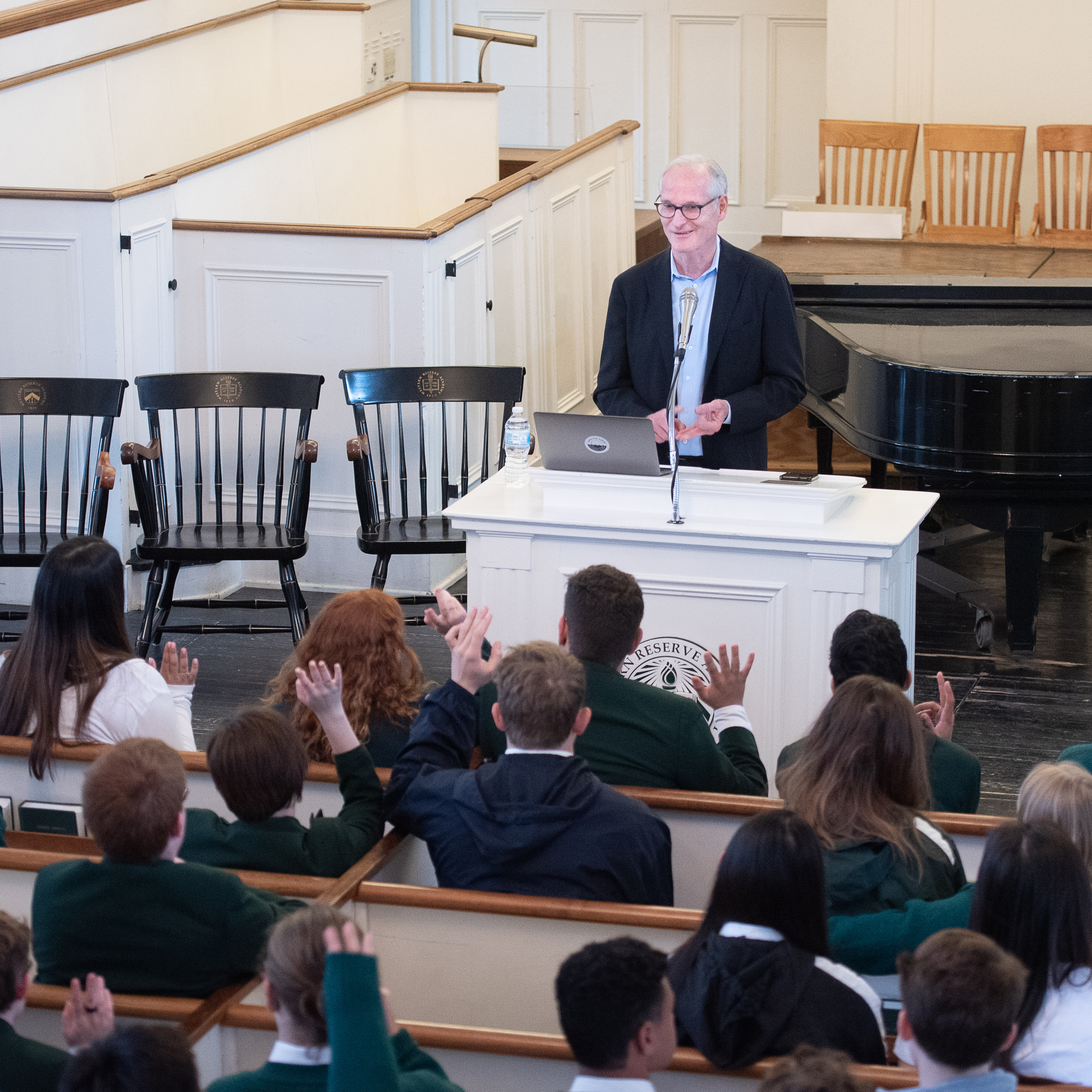 In the short span of time since his graduation from WRA, Brad Burnham '73 has lived to experience - and helped to fuel - a sea change in society. He visited WRA last week as the 2019 Morgan Speaker, a series enabled each year by the Burton D. Morgan Foundation. Burnham addressed students about the emergence and now ubiquity of the internet through all its various iterations, from an uncharted world of infinite possibilities to an advanced domain of advertisers and algorithms. Topics of Burnham's insightful talk included the internet's effect on politics, Twitter's beginnings as a "find your friend" mechanism for its founders, solutions to current and looming privacy concerns and regulatory challenges facing the tech industry.

Burnham, a managing partner with New York City-based venture capital company Union Square Ventures, began with an overview of his industry, pointing to curiosity as the driver for his interest in cultivating new companies and calling venture capital, "a bet on a dream." Over the past two decades, there's been no bigger dream space than technology, which is where Burnham has focused his attention, from his time with AT&T's venture capital arm and now with Union Square, widely known as an investor in many of today's most popular internet platforms, including Twitter, Etsy, Foursquare, KickStarter and Indeed.

Burnham conveyed a blend of nostalgia, excitement, caution and anticipation as he described the lifecycle of the internet, omnipresent but enduringly unpredictable. For the students in the audience, he started by describing an era that may sound as foreign to them as its antithesis sounded to adults, pre-internet age.

"In the media industry before, if you wanted access to an audience, you had to ask permission," he said. "As a result, innovation was constrained. Now, the permission requirement, the gatekeeper, has gone away. The world we live in allows anyone to reach an audience. When anyone can get to an audience, you see really interesting talents... maybe a musician from a small town who can reach a world stage. There is a belief in humans and their capacity to innovate."

Burnham described upsides and their accompanying downsides in the technology industry. During the tech boom of the early 2000s, "we believed we could create a world where a larger number of smaller companies would be competing for consumer attention, exploding innovation. In part, we got this, but it didn't stay this way."

"Eventually business models were determined to be advertising," he said. "This changed our relationship with the provider, ushering in the idea of 'surveillance capitalism.' We leave digital footprints everywhere we go, and these can be packaged and sold."

While Burnham lamented ill effects, he had a realistic and optimistic outlook.

"We are going to live in this media and our presence in the digital world will grow and grow," he said. "We need to understand the market power and target market failure. I believe in the next decade, we will go from a world that exists today - with different sites with different views of us selling pieces of us to advertisers - to a situation where companies will come together to create a complete picture of you, and users will have some control over this data. A combination of targeted regulation, new technology and jurisprudence around data can happen."

For Burnham, the thrill of "brave new world investments," of endeavoring to predict the unpredictable and map new solutions, continues to inspire him, even in the face of challenges and a heavy measure of the unknown.

"Access to knowledge, and each other, are fundamental goods that create a richer society," he said. "In the end, I'm an optimist."

Watch a video recording of his presentation.