Save the Dates for WRA's final Spring Dance Performance

Western Reserve Academy's Dance Program presents "Four Letter Words, Act II" as a live performance in the Knight Fine Arts Center. Mark your calendars for Friday, May 21, and Saturday, May 22, at 8 p.m. Seats will be limited. 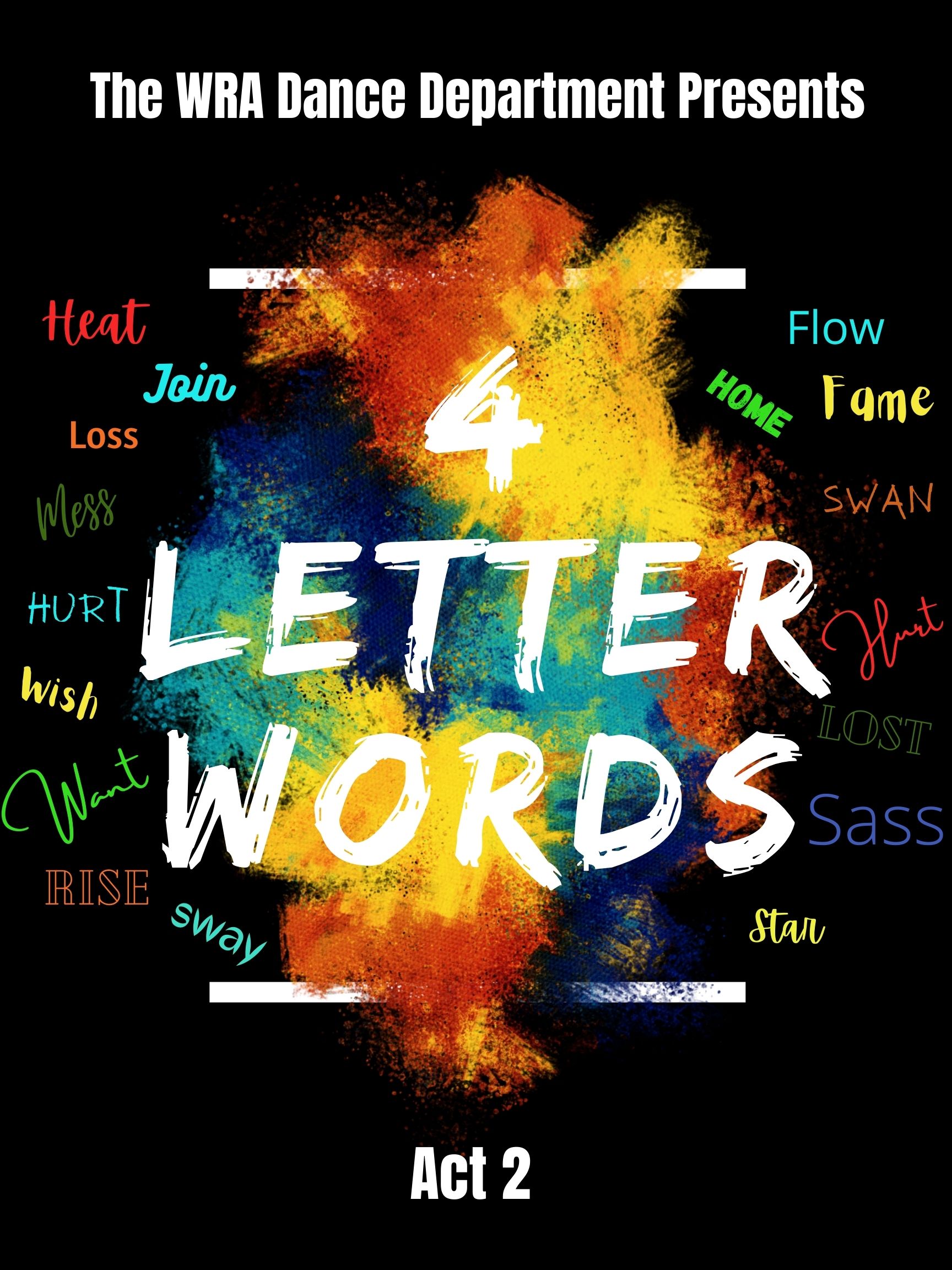 The dancers of Module 4 have been hard at work preparing for their final project, "Four Letter Words, Act II." A live performance and continuation of Module 3's filmed dance series, this production will return audience members and dancers to the Knight Fine Arts Center for a spectacular show and phenomenal finale to a year of remarkable fine arts performances.

There will be 17 pieces in total, including three works of student choreography — one piece developed by Kaitlyn Kuchar '22 and Gabby Hrivnak '23; one by Vanessa Friedmann '21 and Suzannah Sanders Burdis '21; one by Kaitlyn, Gabby, David King '22 and Ryan Favaro '22.

Like in the Module 3 production, this show will explore, as the name suggests, four-letter words, with titles such as Hurt, Wish, Sass, Star, Mess and Home, and showcasing a variety of styles from ballet to hip hop. It's an eclectic mix of mood and experience, very much mirroring our students', indeed, our entire WRA community's, journey through an unconventional school year full of change.

There have been four dance performances this year — two more than is traditionally performed — to ensure that each of the four modules end their course with a performance to showcase their progression and talents. The reality of putting on shows in a pandemic has pushed members of our Fine Arts Department to be adaptable and creative in how they produce their work, culminating in outdoor music concerts and filmed productions for safe viewings at home.

Our Dance Program in particular has proven, over and over, that the time-honored phrase "The show must go on" bears truth. When Director of the WRA Dance Program Katie Velbeck and Assistant Director of the WRA Dance Program Ali Anzaldi realized they wouldn't be able to put on a second live performance safely, they pivoted and created a filmed series, "Across the Divide, Act II," undeterred by their limited camera and video editing experience (though you would not guess when watching!) Through unplanned breaks in the schedule and adhering to all COVID protocols, they and their dancers persisted and created great work of which all should be very proud.

Reflecting on this year, both Velbeck and Anzaldi remarked on how much they appreciated everyone's resilience, their ability to adapt and unwavering support of one another.

"I definitely wouldn't have been able to get through it without Ali or the kids' help," said Velbeck.

To end the year with a live performance on the KFAC stage is a poignant point of pride for both Velbeck and Anzaldi.

"Being back in KFAC feels like coming home," said Anzaldi. "I think the kids and all of us are really excited for the energy that this show is going to bring. Though we were all pleasantly surprised with the reception of the dance videos, being able to put on a live show is just going to be a completely different experience. And I think it relates to everyone's excitement that it feels like we're going back to normal, such as having the musical be a live show, seeing art in Moos Gallery again. It's just a great way to end the year for the Fine & Performing Arts Department."

Both faculty members spoke with great pride and appreciation for the dancers of Module 4, and for all of the dancers who worked so hard this year.

"It'll be great to look back on this year to see where we started and where we ended," said Velbeck. "And for me, I just think the arts can bring so much healing. You know, it forces you to kind of confront some of your emotions that maybe you would otherwise put in a box. And in this year, I think that was a really good thing for our students to experience. We're just really proud of them."