A Fond Farewell: WRA community honors departing Head of School in a special Morning Meeting
May 20 2019 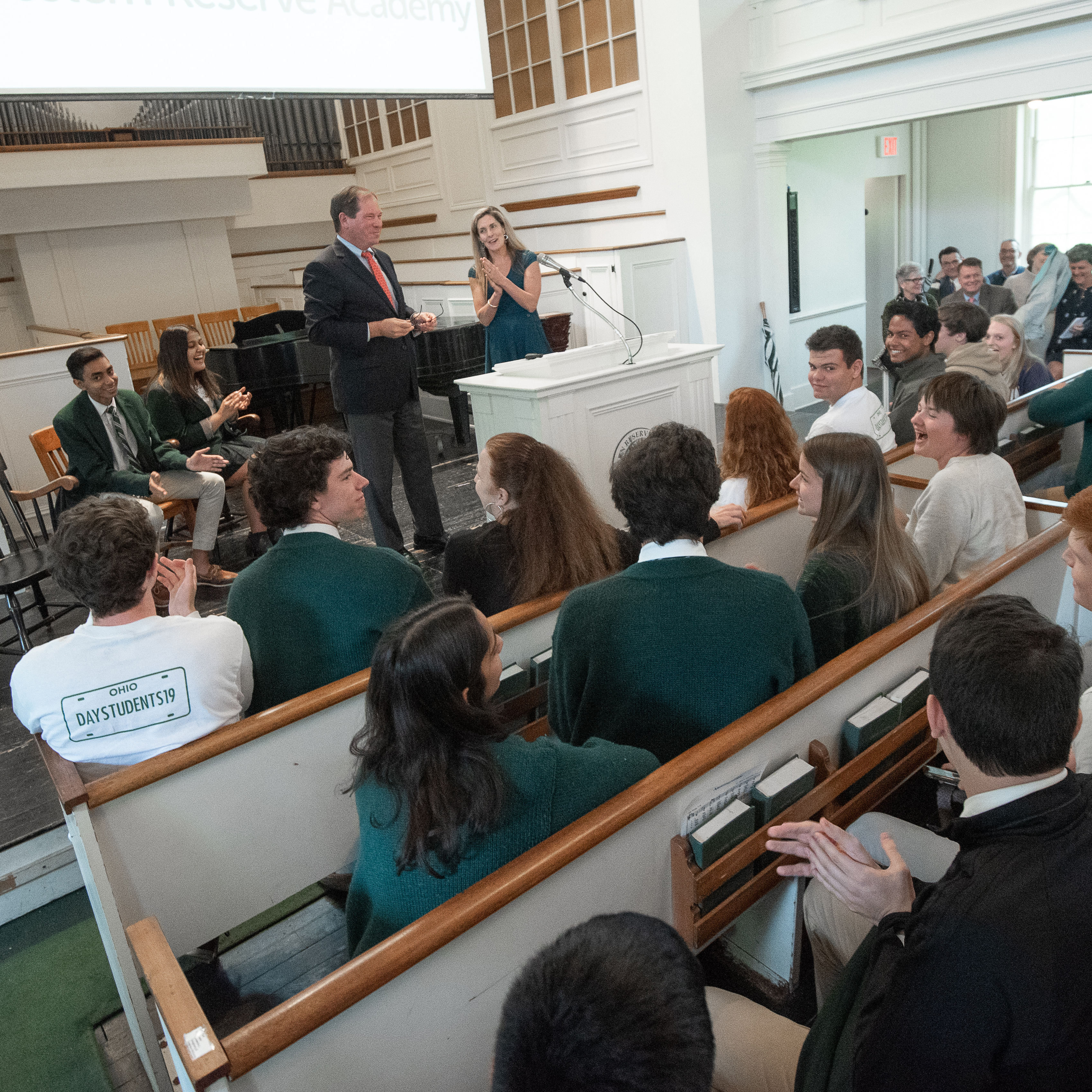 They say there's no place like home, and for Head of School Christopher D. Burner '80, Western Reserve Academy has been home for almost his entire life.

On Monday, May 13, the Reserve community came together in the Chapel in a special Morning Meeting to celebrate the man who has held the helm since 2008, the school's 31st Head of School and a leader who has ushered WRA through some of the most transformative years in the school's history.

Coordinated by Mathematics Department faculty member Katie Bonomo, the meeting's program brought in Chris' close friends, longtime colleagues, a student advisee and more -- culminating in a steady avalanche of fond memories, stories and musical performances for the man seated in front of the Chapel.

He listened with a broad smile as various people took to the podium. History Department faculty member Diccon Ong '81 recounted knowing Chris as a fellow student and how he remembers him as a celebrated, well, jock (his words), who seemingly broke the stereotype with his unfailing kindness and habitual reading of the newspaper in the library. Someone who seemed to have it all -- brawn, brains and friendliness, to boot.

Not long after, his good friend Matt Schweikert '80 took to the stage, acknowledging Diccon's kind description of Chris but assured the audience that his friend was most likely reading the newspaper comics. He painted a colorful picture of Chris, shared some of his rowdier moments, but it was clear that Chris was, and still is, a loyal and great friend to have.

When you reflect on his years at Reserve, it's easy to run through all the various roles he has held. He has worked in the Admission Office, taught Latin, coached various sports, advised students; a list we all know well. What we might not know is the impact he has had on members of the Reserve family. He hired Katie Bonomo, joyfully attended hers and fellow faculty member Michael Bonomo's wedding, and was one of the only people to receive a note from her after the birth of her children. He has been longtime friends with Herb Haller '84, who eagerly and cheerfully shared a story of a mispronounced name at a fateful Commencement ceremony.

Truly, Chris has been a fixture on campus, both as a friendly face and a steady, confident leader. For so many, it's too hard to say goodbye -- so perhaps it's more accurate to say that in this Morning Meeting, the WRA community gathered to say, "We wish you all the best. Thank you for everything. You'll always have a home here."