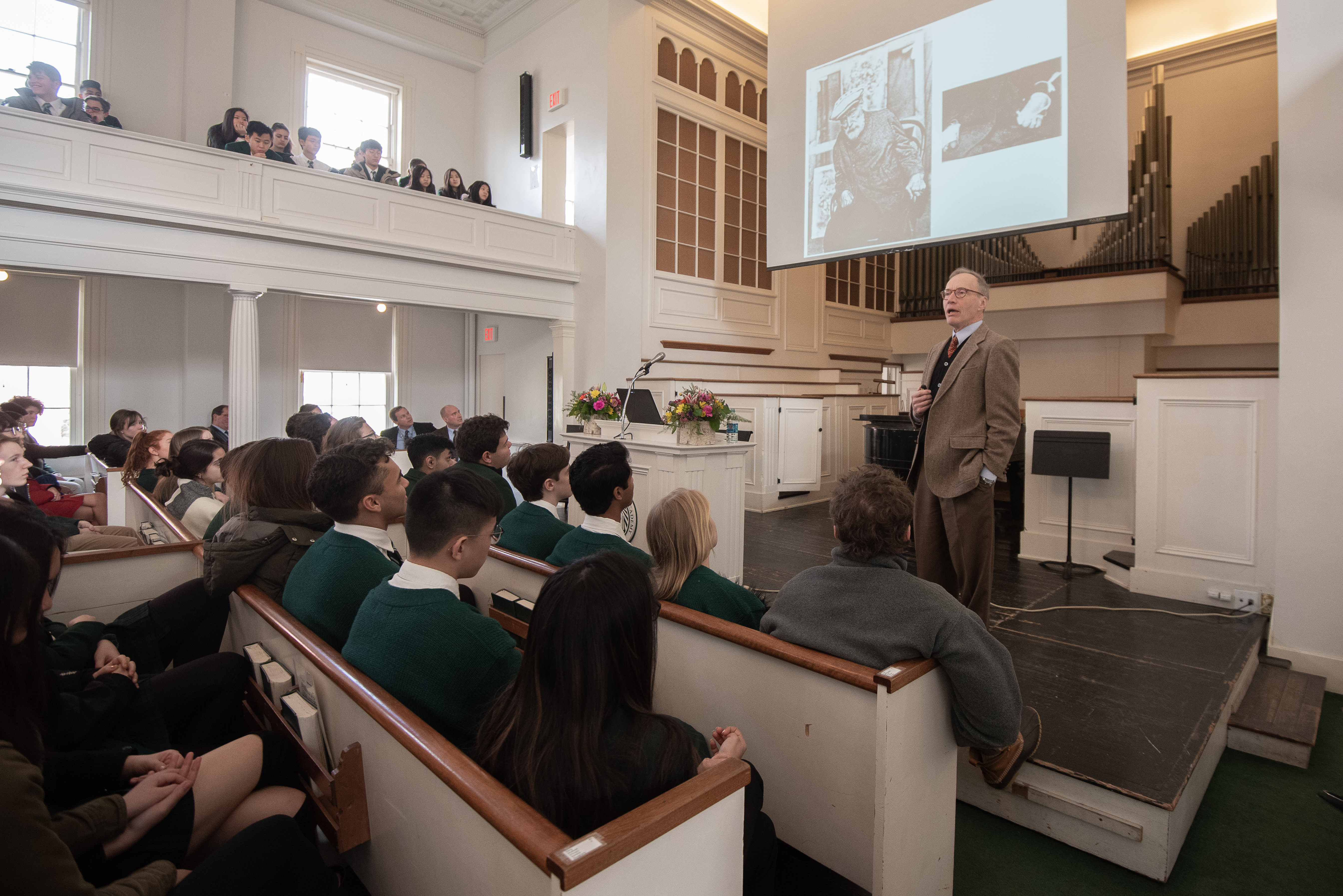 On Friday. Feb. 8, Dr. George Spencer-Green '65 stood before the Chapel podium and gestured to the lowered screen, where a famous Impressionist painting was on full, colorful display.

"Does anyone know who painted this?" he queried, and he did not have to wait long for the murmured answers from a handful of student in the pews.

Pierre-Auguste Renoir, he explained, suffered from rheumatoid arthritis. In the following slide, he revealed photographs taken of the man in the late 1800s, his hands heavily bandaged and swollen and gnarled with the disease. Dr. Spencer-Green shared that "Dance at Bougival," a painting emblematic of the impressionist era, was in fact created by a man whom at the end of his life would be reduced to painting with a brush tied to his arthritic hand.

Rheumatoid arthritis is an impairment that Dr. Spencer-Green has devoted much of his career trying to treat, and with significant findings and success. He has been a leader in the development of biological therapies, a new class of treatment for a wide range of chronic inflammatory conditions, including rheumatoid arthritis. He was a member of the team that designed and conducted the clinical trials using targeted therapies and patients. This led to Enbrel becoming the first FDA approved biological treatment for rheumatoid arthritis. In addition to this, he also designed and conducted the trials that led to the FDA approval of Humira.

Now the Vice President and Head of the Biosimilars Development Program at Pfizer, Dr. Spencer-Green has made essential contributions to the study and treatment of rheumatoid arthritis. He has been instrumental in the design and execution of clinical trials in patients, which are essential to establish the safety and efficacy of new therapies such as biologic treatments, prior to their regulatory approval and availability to consumers. Biologics have revolutionized the management of these disorders and become the standard of care by which other therapies are measured. 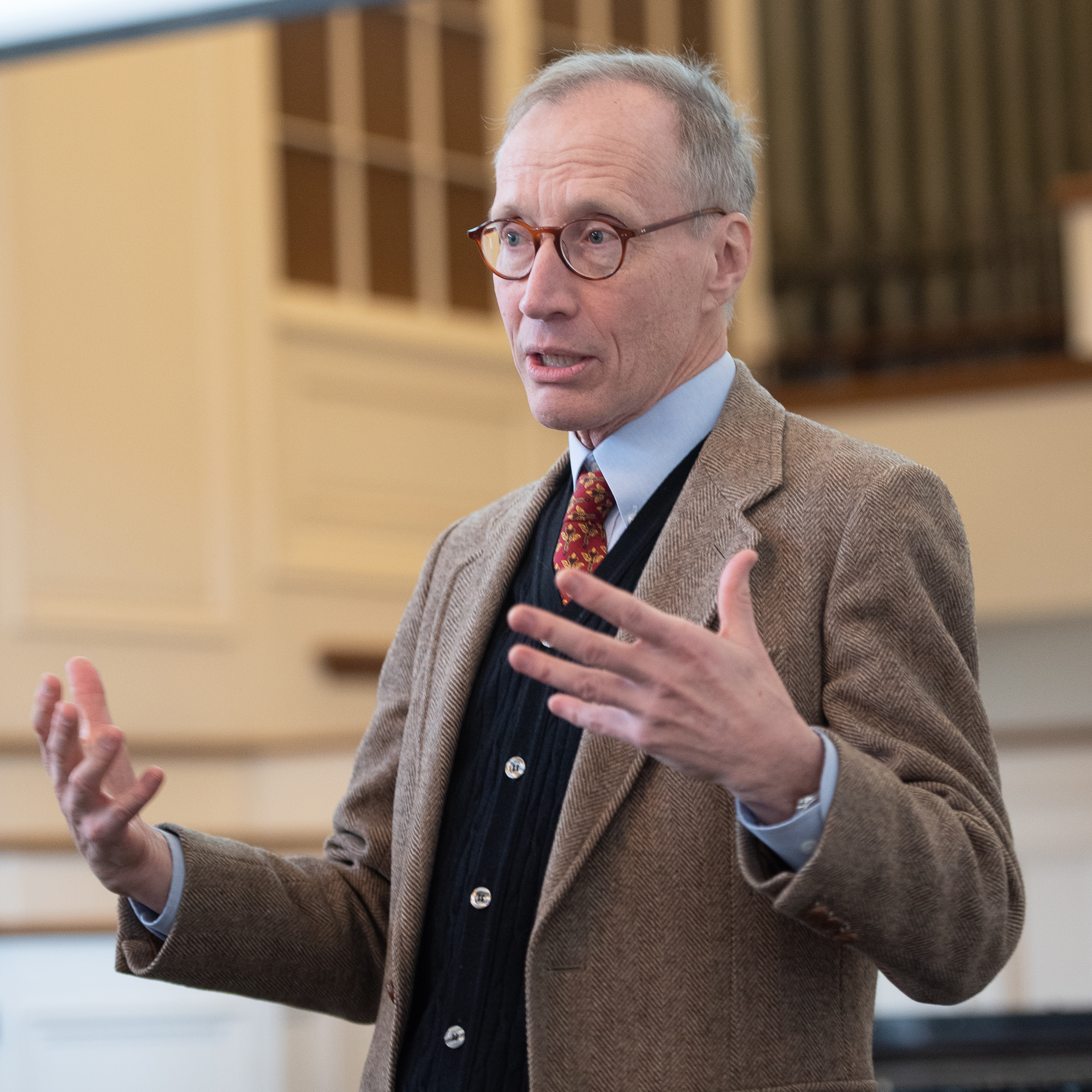 But Dr. Spencer-Green didn't share this with the WRA community, instead choosing to describe his career in a truly understated manner.

"What I am is a rheumatologist, and this is your lucky day," he began. "Because I'm going to make all of you what has taken me many, many years. When I'm finished today, you are all going to be rheumatologists."

And indeed, they were!

Under his careful and meticulous instruction, the audience learned about the biological process of rheumatoid arthritis and the treatment. He walked students through his experience, helping them understand the process of becoming a rheumatologist. Antibodies, antigens, ligens, autoimmune diseases, tuminocrosis factor, animal models, clinical trials -- all of these things were discussed and explained, as they were critical to understanding how to measure his and his team's success.

Looking out at the audience of students, he had this advice to give as he thought back to the time when he was a pupil sitting in the same Chapel pews.

"I have evolved to an area of medicine I never dreamed of when I entered medical school," he said. "The same opportunity exists for someone taking that path now. But no matter what field that student may decide to pursue, don't be afraid to take risks and make mistakes."

At the end of his talk, he turned his attention to the graduating class seated in the front rows. To them, he shared a favored quote of his by Winston Churchill, which he thought aptly summarized the next chapter in their life.

"In World War II, when England won its first battle against the Germans, the country was ecstatic," he said. "And Winston Churchill told them, 'Now this is not the end. It is not even the beginning of the end. But it is, perhaps, the end of the beginning.' You're coming a landmark. Soon, you're going to be off to college, you'll be making career decisions. You're going to make decisions and use what you've learned here to move forward. But your time here is not the end, rather it is the end of the beginning."